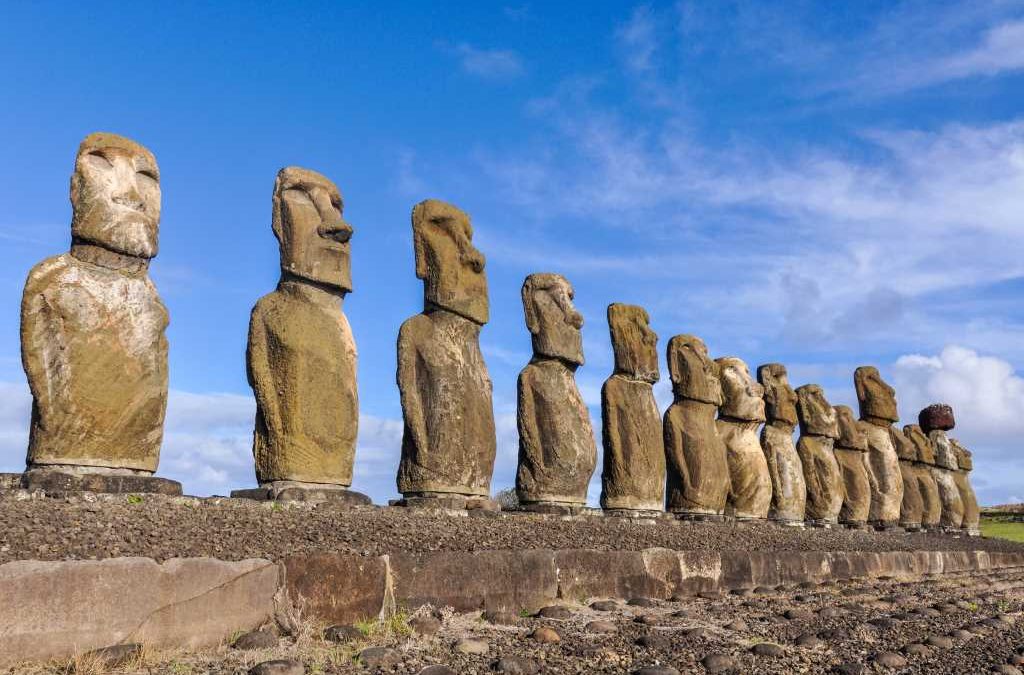 From the soil of Easter Island to the clinics of Paris, the journey of rapamycin to its current position as a potential treatment for sporadic inclusion body myositis is a fascinating story of scientific discovery. A recent clinical trial provided encouraging results, pointing the way to future studies.

Overview of the Clinical Trial

Rapamycin, also known as sirolimus, shows promise as a potential treatment for the muscle disease, inclusion body myositis, based on the results of a Phase IIb study performed in France. Results of this prospective, randomized, controlled, double-blind research study were presented at the American College of Rheumatology Annual Meeting in San Diego on November 7, 2017. The study included 44 patients, who were treated for 12 months: 22 received rapamycin (2 mg/day) and 22 received a placebo.

Primary Endpoint of the Clinical Trial 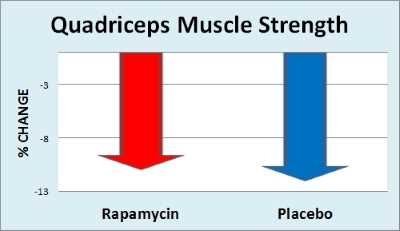 When designing the trial, the investigators decided to use changes in quadriceps muscle strength as the primary endpoint, the main measure of success or failure. A specialized machine known as a dynamometer was used to measure the strength of the quadriceps, the muscle group in the thigh that is used to straighten the knee. Unfortunately, using this measure, the study failed to demonstrate a beneficial effect of rapamycin. Quadriceps muscle strength decreased similarly in the rapamycin and placebo groups, -11% vs. -12% (all figures have been rounded to the nearest whole number).

Secondary Endpoints of the Clinical Trial

The study, however, also included secondary endpoints, and these results were encouraging. 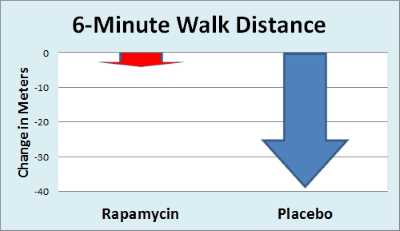 The 6-Minute Walk Test, measuring how far a person can walk in 6 minutes, is often considered to be the gold standard for evaluating walking capability, and is often used in clinical trials of neuromuscular disease treatments. Rapamycin-treated patients, on average, lost 4 meters of distance during the 12 months of the study, while placebo-treated patients lost 38 meters.

Strength of muscles other than the quadriceps were also studied. The IBM Weakness Composite Index evaluated the strength and function of several muscle groups, combining the results into one index number. Patients treated with rapamycin declined 12%, while patients treated with placebo declined 24%. 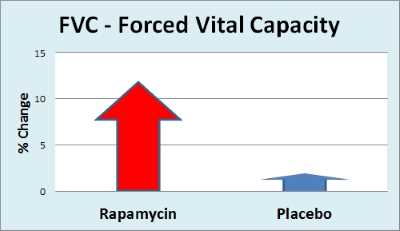 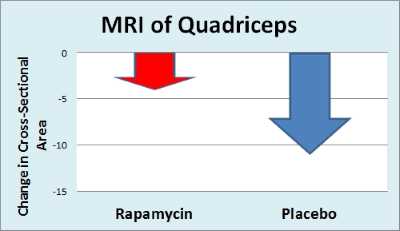 Magnetic resonance imaging (MRI) was used as another indicator of muscle health. As inclusion body myositis progresses, the volume of muscle decreases, and muscle tissue is replaced by fat, which can been seen on MRI scans. MRI showed that rapamycin-treated patients had better preservation of muscle tissue compared with placebo-treated patients. The cross-sectional area of contractile muscle in the quadriceps declined by 3% in the rapamycin group, and by 11% in the placebo group.

Enthusiasm for rapamycin as a treatment for inclusion body myositis must be tempered by the following facts:
• The study was small, involving only 22 treated patients
• The study was done at only one center.
• The primary endpoint was not a success.
• Rapamycin is a potent drug, with serious side effects. In this study, three rapamycin-treated patients had to drop out because of complications of therapy. Rapamycin side effects include: risk of infection due to suppression of the immune system; increased blood sugar and risk of diabetes; increased blood lipids, such as cholesterol; swollen feet; mouth sores; high blood pressure; constipation and diarrhea; and increased risk of bleeding due to a lowering of platelet numbers.

On the other hand, there are reasons for optimism regarding rapamycin as an inclusion body myositis treatment.
• Promising results were reported for several of the secondary endpoints, which are encouraging enough to spark interest in further studies.
• Rapamycin is already an established, FDA-approved drug, which diminishes financial and regulatory hurdles.
• Rapamycin has been used for other conditions for decades, and is well-known. Doctors already have experience managing the dose and dealing with complications of therapy.

The History of Rapamycin’s Discovery and Its Uses in Medicine 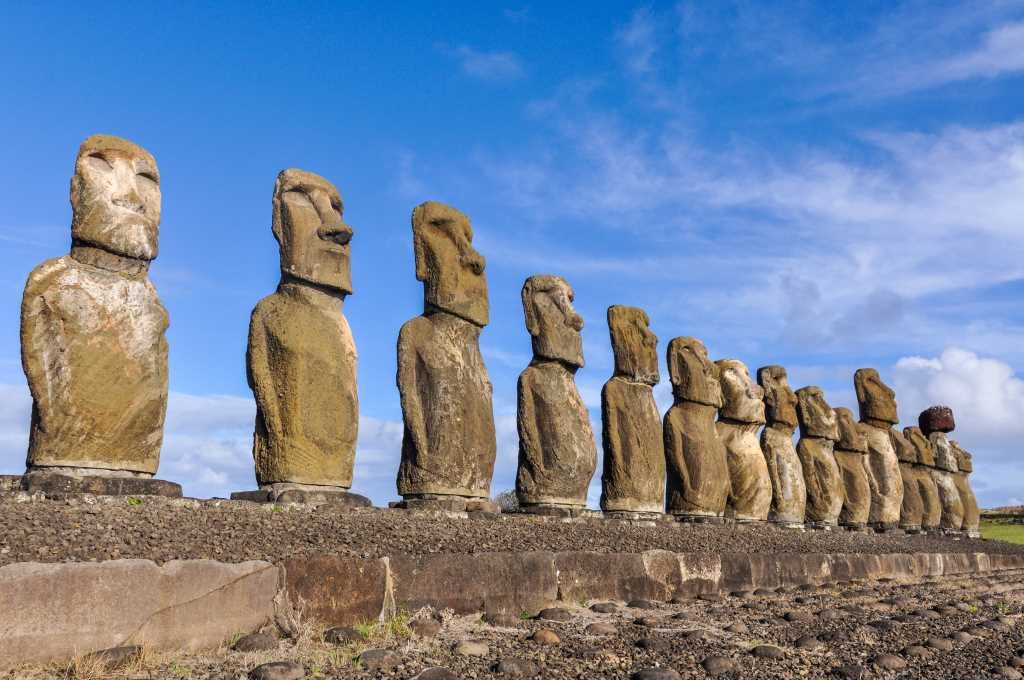 The story of rapamycin begins on Easter Island, one of the most remote inhabited communities in the world. Located in the Pacific Ocean, over 2,000 miles from Chile, Easter Island is famous for its many large-headed stone statues, known as moai. In 1964 a scientific expedition visited Easter Island. Soil samples were collected, and, after returning to Canada, scientists discovered that a substance produced by a bacteria in the soil could kill yeast. Named rapamycin, after Rapa Nui, the Polynesian name for the island, this substance was investigated as a medical treatment for fighting yeast and other fungal infections, but further work was abandoned when it was found that the substance depressed the human body’s immune system.

A scientist at Ayerst Laboratories, Dr. Suren Sehgal, was nevertheless intrigued, and he continued to study rapamycin. When Ayerst closed its Montreal lab in 1983, scientists were instructed to destroy any biological samples that weren’t being used in active, productive work. Sehgal didn’t want to abandon rapamycin, so he snuck a few vials of the rapamycin-producting bacteria, Streptomyces hygroscopicus, into his home freezer. The vials, packed in dry ice, traveled with him to his new home in New Jersey.

When Ayerst was acquired by Wyeth in 1987, Dr. Sehgal convinced his new bosses to let him officially resume his work on rapamycin. After much further study, rapamycin was approved in 1999 to prevent rejection in kidney transplant patients, where it has been very successful, and is still used. It has also been approved to treat certain cancers. Lately, it has received extensive publicity as a potential anti-aging therapy, and it has already been proven to extend the lifespan of mice. Rapamycin also shows possible activity in fighting certain diseases associated with aging, such as Parkinson’s disease and Alzheimer’s disease.

Rapamycin and mTOR, the “Master Switch” of Cell Growth, and the Implications for Inclusion Body Myositis Treatment

Scientists studying the effects of rapamycin discovered that it affects cell growth in organisms as diverse as yeast and humans. Rapamycin affects certain protein complexes that have the descriptive name of Target Of Rapamycin, or TOR. The version of these complexes found in humans was originally called the mammalian Target of Rapamycin, but is now officially known as the mechanistic Target of Rapamycin (mTOR). Investigations of mTOR have revealed that it is a “master switch” or a “central regulator” of cell growth or proliferation. Rapamycin turns off the switch—it inhibits mTOR. Studies of mTOR have led to broad insights into the molecular biology and physiology of cells.

The mTOR pathway is complicated, but, to put it simply, when our bodies have plenty of nutrients, mTOR is activated, telling the cells that they should grow and divide. MTOR activation increases protein production and energy production, aids healing, and encourages the growth of muscle. However, when the body is stressed, such as when nutrients are in short supply, mTOR is inhibited.

Inhibiting mTOR can be a good thing. Activation of mTOR and increased growth sounds good, but excessive activation can cause problems. For example, mTOR activation is associated with cancer, a disease characterized by unchecked cell growth. Excess activation of the mTOR pathway by abundant food may be a factor in the increasing occurrence of diabetes. And, finally, mTOR stimulation may promote aging and age-related diseases.

Proteins must continually be recycled in our bodies. Certain situations demand the production of specific proteins, but when conditions change, some of these proteins are broken down, and the fragments are used to produce new, different proteins. In addition, proteins sometimes get damaged and become useless, or even harmful, and the body needs to get rid of them. Autophagy (“self-eating”) is the molecular process that cleans up damaged and ineffective proteins. Autophagy is decreased when mTOR is activated, and decreased autophagy can lead to aging and disease. Rapamycin, by inhibiting mTOR, increases autophagy. 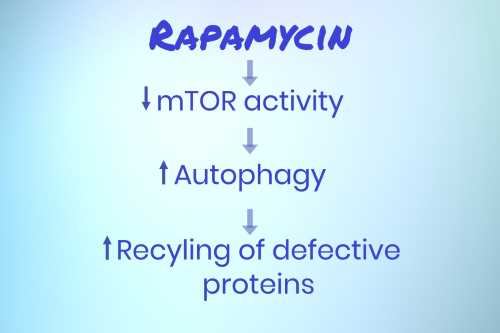 Another beneficial effect is that rapamycin, through its effect on mTOR, may be useful in fighting mitochondrial disease. Muscle mitochondria are abnormal in inclusion body myositis, so improving mitochondrial function could help treat IBM. In addition, recent studies seem to indicate that mTOR inhibition may help maintain stem cell populations.

Rapamycin and the Immune System in Inclusion Body Myositis

Rapamycin’s role in inclusion body myositis is even more complicated, however, because of its effects on the immune system. IBM is an inflammatory muscle disease—the immune system is over-active in IBM muscles, and this is a major part of the disease. Research on an experimental mouse model of autoimmune myositis led to the idea of using rapamycin as a treatment for myositis.

Mice were given an injection of some chemicals, including a muscle protein, which stimulated an immune response, similar to the response caused by a vaccination. The mice developed inflammation in their muscles, or myositis. It was discovered that transferring certain white blood cells, T-effector cells, from these mice into healthy mice could cause myositis in these new mice. However, other white blood cells, T-regulatory cells, protected against myositis. A later study involved giving the mice rapamycin, which was selected because it depletes the T-effector cells while preserving the T-regulatory cells. Rapamycin was effective in this mouse model of myositis, and further work led to the recently completed Phase II study in humans with inclusion body myositis.

The Phase II clinical trial results are positive enough to encourage further study. A larger, Phase III trial would be useful, including more patients and several medical centers. Pfizer, a large pharmaceutical company, manufactures Rapamune, a version of rapamycin. Pfizer has the resources and experience to conduct a large trial, and this could be an interesting opportunity. 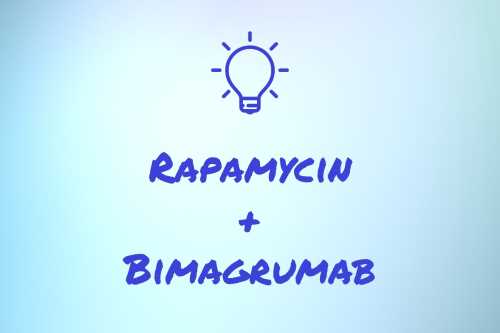 To understand the potential benefit of combining these two drugs, it helps to review the actions of rapamycin that could influence the course of inclusion body myositis. 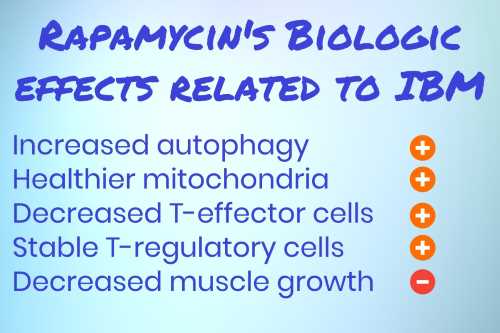 Rapamycin has a positive effect on autophagy, mitochondria, and T-cells, but its inhibitory effect on muscle growth is clearly a negative for a muscle-wasting disease like inclusion body myositis. Bimagrumab, in contrast, fills in the gap, since it encourages muscle growth.

Rapamycin has inspired the development of additional, similar drugs, sometimes known as “rapalogs.” One of these is everolimus (note the similarity to the alternate name for rapamycin, sirolimus). Everolimus is made by Novartis, a large pharmaceutical company based in Switzerland. Novartis is also the company that conducted the clinical trial of bimagrumab for IBM. If the combination of everolimus and bimagrumab is successful in treating inclusion body myositis, Novartis would be able to market two of its medications for the same disease. A demonstration of interest from the inclusion body myositis community may be helpful in convincing Novartis to conduct this trial.

ADDENDUM (June 27, 2020) – Funding announced for a Phase III clinical trial of rapamycin as a potential treatment for inclusion body myositis.

Abstract of clinical trial presentation given at the American College of Rheumatology Annual Meeting, November, 2017

Short summary of the scientific history of rapamycin and mTOR (technical article) Click the “Main” dropdown arrow to see the full article.