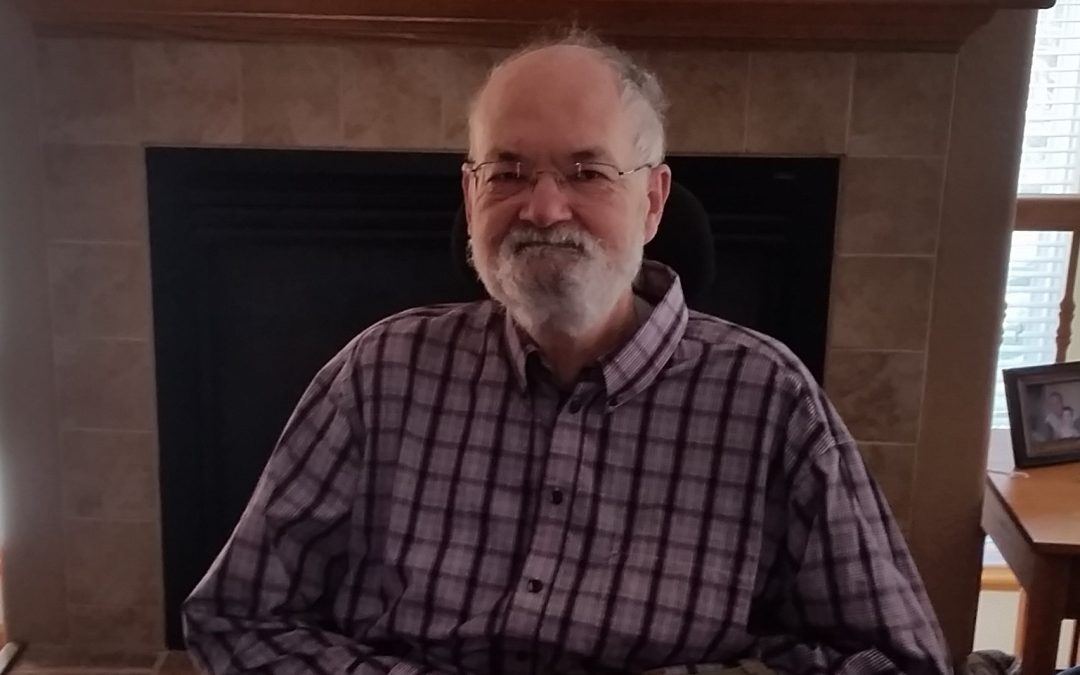 IB Myositis is a YouTube video channel dedicated to inclusion body myositis. It is produced by Jerry King, who was diagnosed with this muscle disease in 2007. Jerry is now in an advanced stage of IBM, and he uses his experiences to share information and insights with other IBM patients.

A prolific international traveler, Jerry had no idea that he was starting a new journey when he fell from the bottom step at the Great Wall of China in 2006. His passports show stamps from 49 different countries, but none of these countries were as strange or unknown as the world of inclusion body myositis that he was entering.

Increasing finger, hand, arm, and leg weakness led him to medical specialists, culminating with a visit to a Kansas neurologist who diagnosed IBM, which was confirmed by a muscle biopsy read at the Mayo Clinic.

There is no effective medical treatment for IBM, but Jerry tried to fight it. “Like so many other people diagnosed with inclusion body myositis, I tried to convince myself that I could overcome this condition via exercise and dietary changes.” He even visited one of the Australian Olympic Team’s traditional Chinese acupuncturists when he was in the country on business. Nothing helped. His muscles continued to weaken.

Falls are a risk for everyone with IBM, and Jerry realized that he had to be especially careful, since any injury could cause dangerous bleeding. Four years after his diagnosis with IBM he resorted to using an electric wheelchair, opting for safety after having some falls caused by his increasingly unsteady walking.

Metal Detecting from a Power Chair

But Jerry isn’t a guy who likes to just “sit around.” He learned about metal detecting from a friend. Intrigued by this hobby, he realized that he could have fun, get outdoors, and exercise his body, all while seated in his power chair. 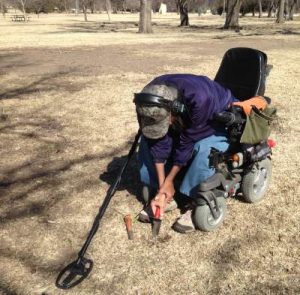 Digging up a find

Locating and digging dropped coins, jewelry, and historical artifacts from the top six inches of earth, while seated in a power chair, is strenuous. Jerry estimates that he did 100 to 200 waist crunches from the seat of his power chair during each of his 3 hour expeditions, 3-4 times a week. His biggest fear was bending over the front of his power chair just a tad too far and doing a face plant on the scorched Kansas earth. Soon, he made sure his power chair’s seat belt was affixed around his waist. 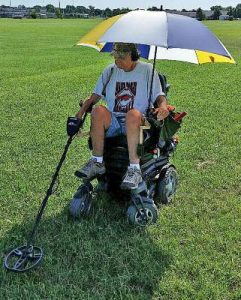 It took some engineering to design a mount on his power chair to support the weight of his metal detector. “When the design was complete, all I had to do was pivot the detector’s search coil in a sweeping motion in front of the power chair.”

In 2016, he recovered 3,225 coins and uncounted pieces of jewelry, relics, and miscellaneous items! 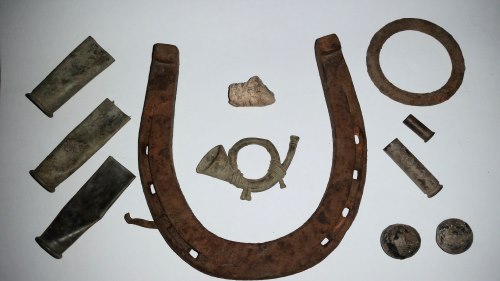 1872 Cavalry Hat Insignia and other artifacts

In this metal detecting video series, he often mentioned inclusion body myositis in an effort to spread awareness of IBM and to combat the misperception that conditions like muscular dystrophy are always diseases of the young. Jerry received many responses to his videos from around the globe; fellow metal detectorists told him how much of an inspiration he was to their hobby. In 2016 he was a guest on the “Global Detection Adventures” podcast hosted out of Germany.

Jerry realized in December, 2017 that his metal detecting days were over, as he could no longer handle the small hand shovel he used to unearth his finds. So he decided to use his video experience to promote IBM information on his new YouTube channel, “IB Myositis.”  His aim was to inform other people with IBM of what lies ahead, and pass on some useful tips.

“My intention is to make it easier to overcome some situations and possibly save others some anguish and cost by sharing how I overcame certain opportunities.”

Here is a sample of topics from the IB Myositis videos:

The Most Recent Episode of “IB Myositis”

Jerry’s audience, especially those newly diagnosed with IBM, appreciate hearing from someone in the advanced stages of IBM. They not only learn for themselves, but they also share the videos with family members and friends.

What drives Jerry to communicate with others who have inclusion body myositis?

“There’s a lack of information being shared about people in the advanced stage of IBM. Even the national myositis conferences cater to those in the early stages, leaving little information about what’s in store in the later stages. Because late stage IBM’ers don’t travel easily to conferences, the newly diagnosed don’t hear the voices of those in the advanced stages of the disease.”

Unfortunately, Jerry’s personal condition has continued to advance, creating challenges for him in his home in Wichita, Kansas, where he has lived with his wife, Cindy, since 1995. Transfers from his power chair to “anywhere” have become perilous. “There comes a time when your mind won’t let you lift up one leg during a transfer because you don’t know if the other leg will hold.” 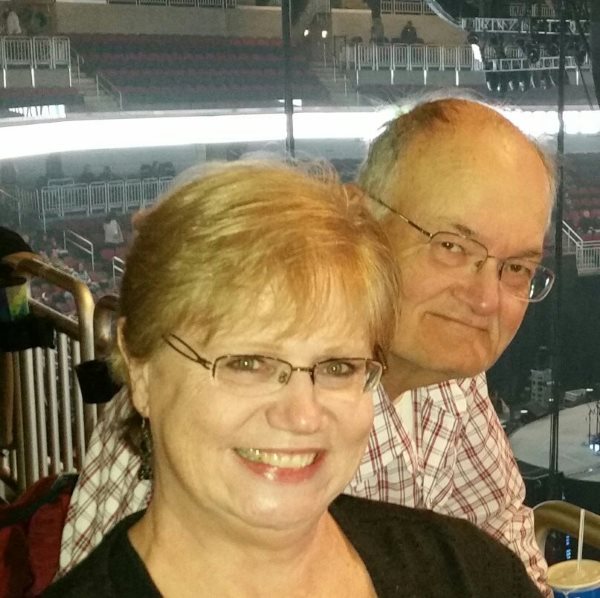 Working on his computer is now difficult. Using the keyboard requires contortions. To use the computer mouse, his left hand must assist his right hand up to the desk top and onto the mouse. Although his right arm and upper body can still slide the mouse around, it’s becoming very difficult to press the mouse buttons. And he has a new problem: “After having my hand grasp the mouse for a while, I’m now finding it difficult to open my hand to release my grip on the mouse.”

Fortunately, modern technology has provided some assistance, and Jerry is grateful for his virtual keyboard and voice recognition programs.

As long as he can find a way, Jerry will continue to write video scripts and share his insights with the inclusion body myositis community.

Visit the IB Myositis YouTube channel, and SUBSCRIBE. Subscribing to a YouTube channel is free and makes it easier to keep track of new videos published to the channel.

Listen to Jerry talk about his metal detecting on the Global Detection Adventures podcast. Start at the 23:00 timing mark. This podcast will be especially helpful if you’d like to try metal detecting yourself.