Inclusion body myositis symptoms are due to muscle weakness, usually beginning in middle-age or later, and worsen gradually over several years. Patients often do not complain to their doctor for a long time, believing that their symptoms are simply due to normal aging. In the early stages, doctors often agree, because the symptoms are subtle and don’t raise any special alarms. Diagnosis is often delayed.

General symptoms of IBM include fatigue and overall loss of strength. Daily tasks may become more tiring. Strength may not improve even with regular visits to the gym.

Physicians should consider IBM whenever an adult patient, especially one over age 40, presents with unexplained frequent falls, trouble standing from a low chair, weak grip, or trouble swallowing. 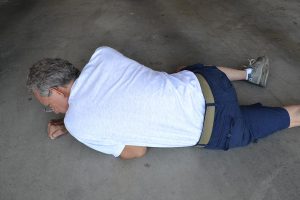 Many people first suspect something is wrong because of repeated falls. A crack in a sidewalk or the edge of a rug can send them sprawling, because the muscles are not strong enough to correct for a slight trip. Sometimes a person will just crumple to the ground without warning, as a knee suddenly gives out. Trouble standing up from a low chair or toilet is a typical inclusion body myositis symptom. It may be necessary to push off with the arms in order to stand. It is also difficult to get up from the floor.

Stairs become a challenge. Handrails become necessary, and it may be impossible to carry anything while climbing stairs. For some IBM patients going down is actually harder than going up.

Many patients gradually progress from a cane, to a walker, to a wheelchair.

Fine hand motions may be impaired. Dressing becomes awkward due to buttons, zippers, and shoelaces. Handwriting may be slow and sloppy, and cutting food and handling utensils may be clumsy. 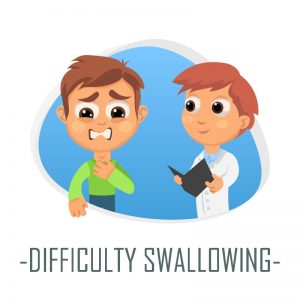 Swallowing difficulty, known as dysphagia, eventually affects many patients, but is an uncommon early symptom of inclusion body myositis. Many patients will not volunteer a history of dysphagia, and must be specifically asked about swallowing problems. However, for some individuals, it is the first symptom, and perhaps the only symptom for several years. Ear, nose and throat physicians, and speech and swallowing therapists, must be alert and consider IBM when seeing patients who have unexplained dysphagia.

Frequent choking can be a severe problem. Eating difficulties can lead to poor nutrition, which can accelerate muscle loss. Aspiration, the entrance of food or liquids into the windpipe, can cause pneumonia, and sometimes is a cause of death.

Although mild weakness of the facial muscles is moderately common, complaints related to the face are infrequent. Some patients cannot close their eyes completely, and develop pain due to eye dryness that is caused by exposure to the air.

Symptoms related to the trunk and neck are rare. Camptocormia is a medical term referring to forward bending of the trunk, and applies to a few IBM patients who cannot hold their torso upright due to weak spine muscles. Similarly, it is possible to have head drop, with the chin resting on the chest due to weak neck muscles.

It is important to remember that inclusion body myositis is a variable disease. Patients become symptomatic at different ages, have different muscles that are most severely affected, and vary greatly in terms of speed of progression and the final amount of disability.

Share This
We use cookies on our website to give you the most relevant experience by remembering your preferences and repeat visits. By continuing to use this site or by clicking “Accept”, you consent to the use of ALL cookies.AcceptPrivacy policy