Muscle biopsy has long been the gold standard test for diagnosing inclusion body myositis. Early classification schemes for diagnosis relied heavily on muscle biopsy findings. However, in recent years increasing importance has been given to symptoms and findings on physical examination, as well as EMG, MRI, and antibody testing. Still, muscle biopsies can still be extremely useful. Also, muscle biopsies are generally required for participation in clinical drug trials.

Video – What is a Muscle Biopsy?

How are Muscle Biopsies Done?

A surgeon performs a biopsy by removing a piece of muscle which can then be evaluated in a laboratory. The surgery is usually done with local anesthesia, which is injected into the skin. Unfortunately, anesthesia cannot be injected into the muscle itself, because the anesthetic fluid would disrupt the tissue and affect the microscopic appearance. Therefore, the surgery is briefly painful when the muscle is cut. A few small pieces of muscle will be removed, typically about 1 x 2.5 cm, or 0.4 x 1 inch. After surgery the muscle may be sore for several days, but severe pain is unusual.

The surgery itself is not complicated, but many factors can affect the quality of the results.

First of all, the biopsy site must be selected. Which muscle should be biopsied? It is important to sample a muscle that is affected by the disease. However, biopsy of a severely damaged muscle should be avoided, because too much of the muscle tissue may have been replaced by fat and scarring. The doctor who orders the biopsy will be guided by the physical examination, sometimes aided by MRI results. Also, a muscle should not be biopsied soon after an EMG has been done on the same muscle, because the EMG needle may cause temporary inflammation that could be falsely interpreted as myositis by the pathologist.

The handling and preparation of the tissue is important. Unlike the case with many other types of biopsies, the entire specimen is not simply dropped into a container of formalin. One specimen is typically put into preservative, while other pieces are frozen.

The muscle sample will be sliced into many sections, which will each be stained with different chemicals (this is why a relatively large muscle specimen is necessary). Some tissue sections may be soaked in dyes that color specific types of cells or structures. Other sections may be exposed to antibodies which will attach themselves to certain proteins in the tissue sample. These antibodies are visible under the microscope because fluorescent compounds or dyes are attached to the antibodies. Some of these antibody studies are specialized and are not done in most pathology laboratories, but they can be extremely helpful in diagnosing inclusion body myositis.

Because of these tissue preparation requirements, and the advantage of having an experienced neuromuscular pathologist interpret the findings, it is often worthwhile to have an academic medical center with an active neuromuscular medicine program involved in the muscle biopsy.

Even with experienced surgeons at specialized centers, biopsies sometimes fail to show conclusive evidence of IBM even when a person does have the disease. Sometimes the biopsy may need to be repeated. Within an affected muscle, the involvement may be patchy, and the biopsy may simply miss a diseased area. Early in the disease, fewer signs of myositis may appear on biopsy. Finally, there is a large variation among patients with inclusion body myositis, and some people may never show all the typical biopsy features of the disease.

What Does the Biopsy Show in Inclusion Body Myositis? 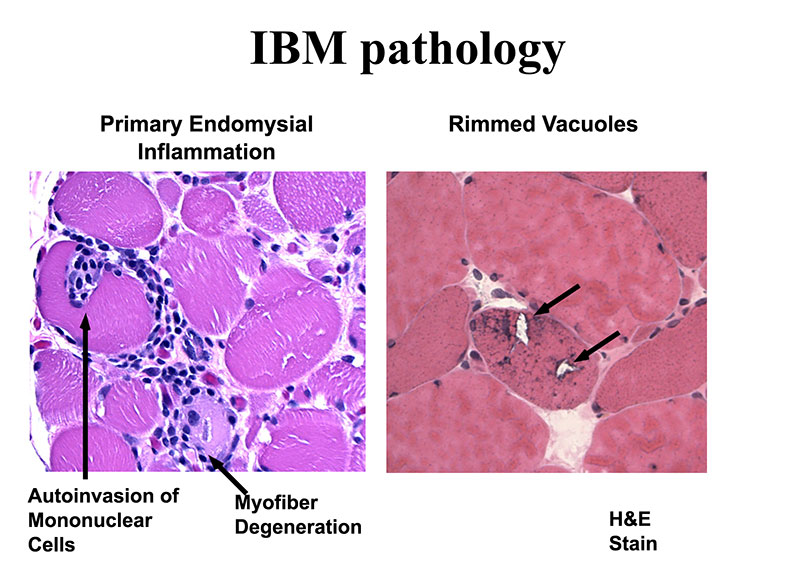 Inflammation is typically identified because of the presence of inflammatory cells which surround and invade the muscle fibers. These cytotoxic T-cells and macrophages are also found in polymyositis, and this may lead to misdiagnosis. “Rimmed vacuoles”, which are tiny spaces within muscle cells, are typically what distinguishes IBM from polymyositis. However, rimmed vacuoles are not always seen in IBM and they can be seen in other muscle diseases as well. Thus, the findings of inflammation and rimmed vacuoles are important clues to making the diagnosis of IBM, but it should be remembered that these features are not always seen in IBM patients and they can be seen in other diseases.
Muscle degeneration is illustrated by several features. Small groups of atrophic fibers are often present. The cytoplasm of muscle cells may contain some particles known as inclusions, the “inclusion bodies” which give IBM its name. Multi-protein aggregates containing misfolded proteins such as TDP-43 and p62 are frequently identified.