Physical examination is important for the diagnosis of inclusion body myositis. Examination can demonstrate the signs of decreased muscle strength and reveal muscle atrophy, or shrinkage. The most commonly weakened muscles are the forearm muscles that flex the fingers, and the thigh muscles that straighten the knees.

General Observations about the Clinical Examination for IBM

The first step in the physical examination for suspected inclusion body myositis is to look for muscle atrophy. As muscle cells shrink or die, the entire muscle gets smaller. This is why IBM is sometimes called a “muscle wasting” disease. Physical examination can show sunken areas of the limbs caused by loss of muscle tissue. However, scar tissue and fat can replace some of the muscle fibers, so atrophy is not always obvious.

Next, the doctor must measure the strength of the muscles. This is commonly done by Manual Muscle Testing (MMT). The patient tries to bend the knee, while the doctor holds the leg and tries to keep the knee straight. The patient lifts his arm up, while the doctor pulls the arm down. The doctor needs skill and experience to properly evaluate muscle strength, since he has to know how much strength to expect in an 80 year-old woman or a 45 year-old man. Demonstrating muscle weakness is a key part of the diagnosis of IBM and other muscle diseases.

Asymmetry of Muscle Weakness is Characteristic of Inclusion Body Myositis

Asymmetry is often present, with weaker muscles on one side of the body. IBM patients usually have greater weakness on the non-dominant side (if a person is right-handed, muscles on the left side will be weaker).

Flexor digitorum profundus: This is the most consistently affected muscle in sporadic inclusion body myositis, although the weakness may be asymptomatic in early stages of the disease. This muscle flexes (bends) the most distant joint in the fingers, but the muscle itself is not located in the fingers, or even in the hands. The muscle is found in the deep tissue of the forearm, on the ventral side, which is the side you see when your palm is facing you. Tendons extend from the muscle all the way to the last bone in the fingers. The ring finger and the little finger are often weakest, although this is not always true.

Flexor pollicis longus: This is similar to the flexor digitorum profundus, except it serves the thumb instead of the fingers. It provides movement at the last joint in the thumb. 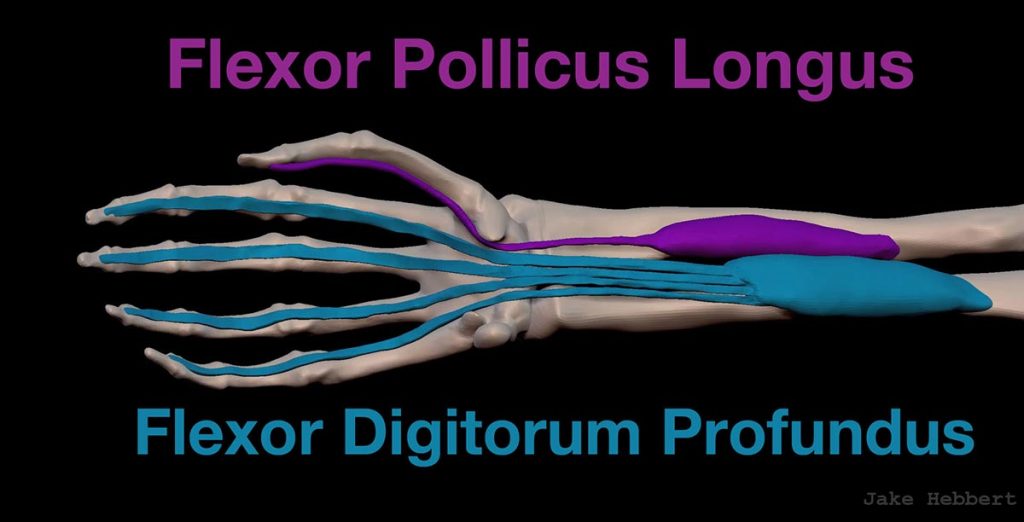 Wrist: Wrist flexion, movement in the direction of the palm, is often weak.

Other hand muscles are usually less affected early in the disease: Finger extension (straightening the fingers) usually remains strong for a long time, and so does wrist extension (movement in the direction of the back of the hand). Often patients will maintain ability to bend the fingers at the first knuckle, known as the metacarpophalangeal joint, and also at the base of the thumb, so that the thumb can still be usefully pressed against the second finger to grasp objects.

Examination of the Finger Flexors

Assessing the health of the finger flexors is important when diagnosing possible inclusion body myositis. Atrophy may be visible as a sunken area in the forearm below the wrist. Strength may be assessed by first having the patient make a fist around the doctor’s extended index finger, squeezing tightly. The doctor then tries to peel back the patient’s fingers, judging their strength as he does so. If available, a device called a hand dynamometer can measure grip strength, providing a strength number which can be compared against tables of normal values. Manual Muscle Testing of the finger flexors is illustrated in the following video.

One extremely simple and useful test for diagnosing inclusion body myositis is to have the patient form a tight fist. A healthy person should be able to “bury”, or conceal, the fingernails of all four fingers. Most IBM patients cannot curl their fingertips enough to do this. The “Fist Sign” is a quick, simple test that should be performed more frequently. 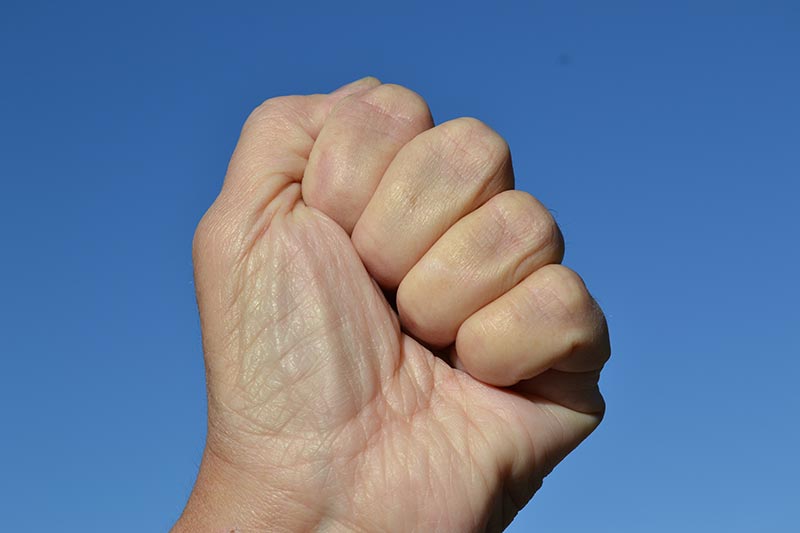 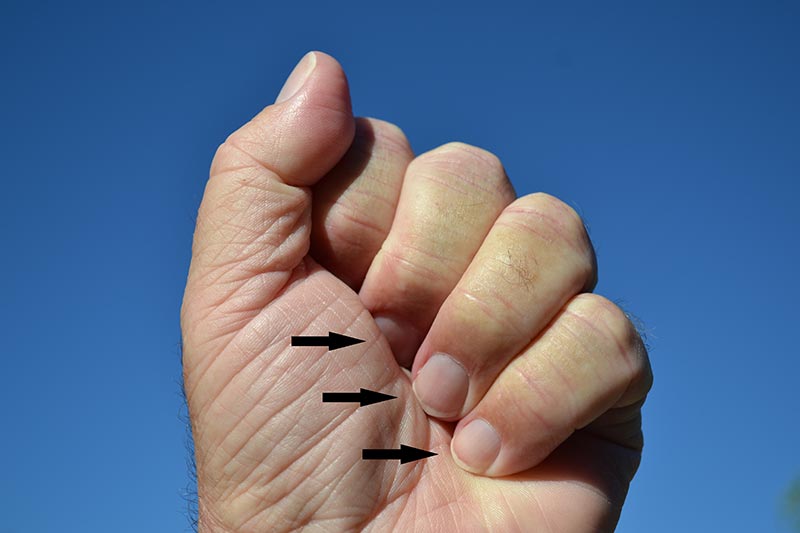 As the disease progresses, finger flexion worsens, as shown in the following photo, which also demonstrates typical asymmetry. 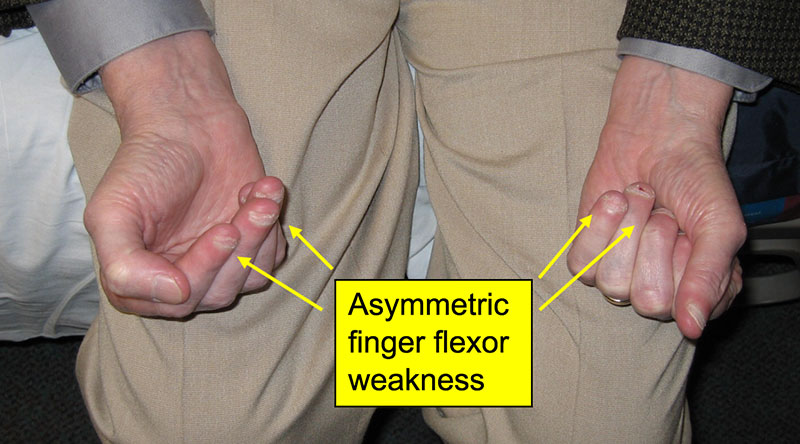 The quadriceps femoris is the group of large muscles in the front of the thigh, and is used to straighten the knee. Quadriceps weakness is found in most cases of IBM muscle disease. The quadriceps is composed of four main muscles (quadriceps is derived from Latin, “four heads”). Inclusion body myositis patients often have visible atrophy of the vastus medialis and vastus lateralis, the medial (inner) and lateral (outer) muscles on either side of the thigh. The rectus femoris, which goes straight down the thigh to the kneecap, is often relatively spared. 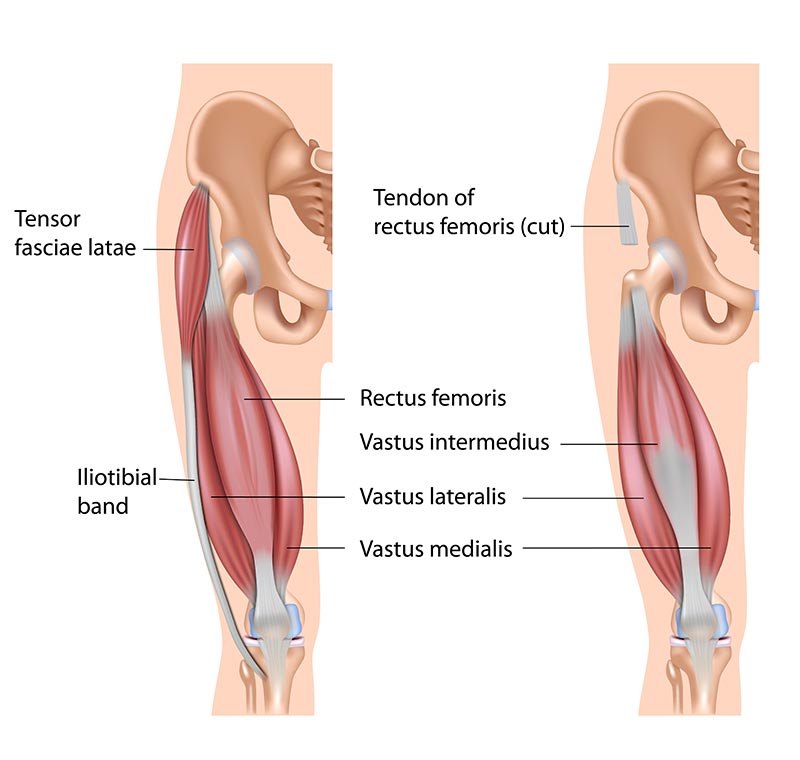 Quadriceps femoris. The rectus femoris has been removed from the right diagram, providing a view of the underlying vastus intermedius.

During an examination for suspected inclusion body myositis, the doctor should observe as the patient stands up from a chair, noticing if the patient uses his arms to push off. It may be helpful to have the patient sit on a foot rest, which provides a very low sitting position, and then ask the patient to stand. Manual Muscle Testing of the quadriceps is illustrated in the video located earlier on this page.

Mild weakness of facial muscles is often present, but frequently overlooked. Weakness of the orbicularis oculi muscles prevents full eyelid closure in rare cases. The strength of lid closure can be examined by having the patient close his eyes as tightly as possible while the doctor uses his fingers and thumbs to try to open the eyes.

All skeletal muscles can be involved, especially as the disease progresses, but if finger flexor weakness is more prominent than shoulder muscle weakness, or if knee straightening is affected more than hip flexion, inclusion body myositis should be strongly considered.